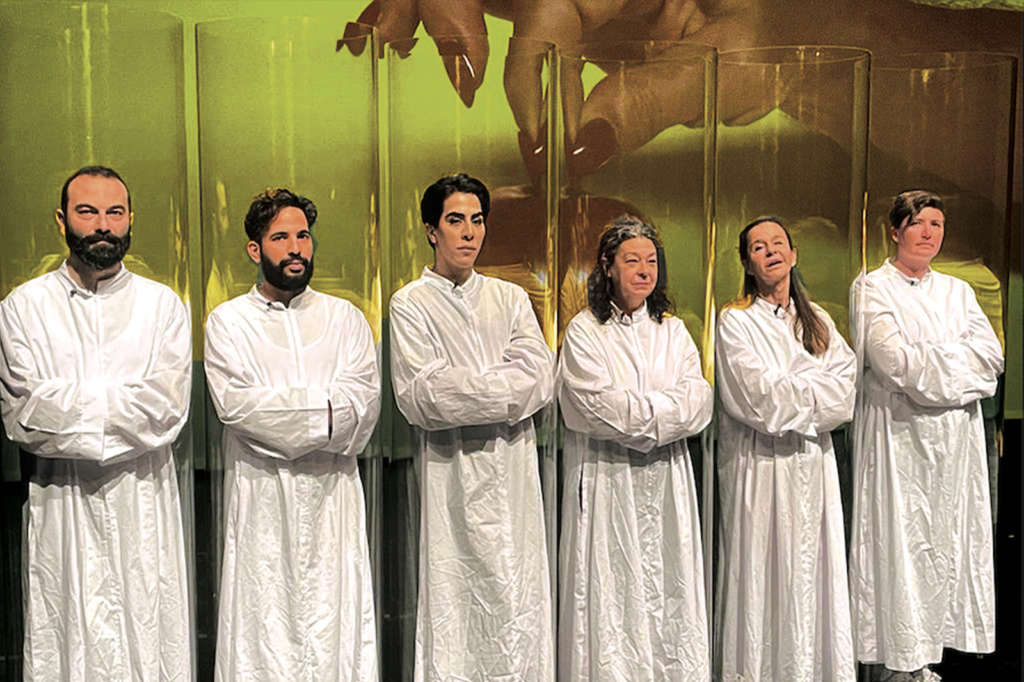 sets and costumes by Andrea Barberini and Giovanni Santecchia

images and graphics by Filippo Partesotti

with the support of Comune di  Bologna, Regione Emilia-Romagna, Italian Ministry of Culture

in agreement with Arcadia & Ricono ltd

God created first Adam, and then, as an afterthought, Eve – in the first lines of the Bible you can find the roots of gender pattern of our society. But maybe there is a different story – what about God’s frocks and dresses hidden in the closet?

Italian theater company Teatri di Vita, in the 30th anniversary of its foundation, arrives in New York and present its last show – “evǝ”, by Jo Clifford and staged by Andrea Adriatico, with an international non-binary, transgender and cisgender cast, from Philadelphia performer and director Rose Freeman to Italian most well-known transsexual actress Eva Robin’s. A powerful comedy, both funny and emotional, with strong political subjects about women and gender issues, homo- and trans-phobia, power of the religion, tradition of sexism. A defy to centuries-old sexist culture and constraining religious beliefs.

“evǝ” is a moving show, in which each spectator can find him/herself. On stage, a heterogenous cast, that includes and actress co-founder of Teatri di Vita Patrizia Bernardi, Met Decay, Saverio Peschechera and Palestinian actor Anas Arqawi. “evǝ” is produced by Teatri di Vita, International Centre for Performing Arts based in Bologna, with the support of Comune di Bologna, Regione Emilia Romagna and the Italian Ministry of Culture.

NOTE ABOUT THE TITLE: In Italian society, there is a strong debate on gender distinctions in the binarism of language. Italian rules of grammar state that collective plural nouns must employ the masculine gender, even though they refer to both genders. A recent proposition to solve this issue and make the language more inclusive is to use the phonetic neuter character schwa “ǝ” as a suffix for plural nouns, in order to emphasise the fluidity of gender. The title “evǝ” (instead of the original title: God’s New Frock) takes up this linguistic challenge, underlining the plurality of Eve and the urge to overcome gender distinctions.

“evǝ” has widely toured in Italy and in Berlin.

Jo Clifford (she/her) is an English playwright and performer, based in Edinburgh. She has written over one hundred plays and she was awarded the Olwen Wymark Prize. Among her works the controversial The gospel according to Jesus, queen of Heaven. God’s new frock (evǝ original title) was written in 2002. During lockdown she has written several pieces for English theatre and radio as well as two short theatrical sequences for her company Queen Jesus Productions. Currently she is working on the opera The not so ugly duckling with Maria MacDonel and The Covid requiem with Lesley Orr for Pitlochry Theatre.

Andrea Adriatico (he/him) is a theater and cinema director. He founded Teatri di Vita, International Center for Performing Arts in Bologna in 1993. He directed several shows based on texts of Koltès, Pasolini, Beckett, Copi, Jelinek, Cormac McCarthy (Italian premiere of Sunset Limited). His works have been presented in many international festivals like Santarcangelo and Venice Biennale. Among his movie, Il vento, di sera / The Wind, in the Evening (“potent sign of an invigorated Italian cinema”, Variety) and Gli anni amari / Bitter Years about the life of gay activist Mario Mieli.

Eva Robin’s (she/her), transsexual icon of Italian scene, she alternates her presence as an actress in television, in cinema (in movies directed by Dario Argento, Damiano Damiani, Maurizio Nichetti, Alessandro Benvenuti) and in theater, since 1993 with Cocteau’s The Human Voice directed by Andrea Adriatico. In theater she has been directed by Adriatico in shows from Copi, Beckett, Jelinek, and by other directors like Valter Malosti and Leo Muscato (in All about my mother, which also earned her the Ubu Award nomination in 2011).

Patrizia Bernardi (she/her) is an actress and co-founder of Teatri di Vita. As acress she has been directed by Adriatico in many shows. Since 2009 she is one of the protagonist of the cultural renaissance of L’Aquila after the earthquake, with Animammersa Association, creating performances and artistic projects.

Anas Arqawi (he/him) studied in Freedom Theatre of Jenin in Palestine, where he acted in performances directed by Nabil Al-Raee and Micaela Miranda. In Teatri di Vita, with the direction of Adriatico, he partecipated in La maschia (H to He) by Claire Dowie and in the film The Bitter Years.

Met Decay (she/their), dancer and performer, has partecipated in performances of Teatro di Sacco (with the direction of Roberto Bisulli) and she worked with choreographers like Daniela Malusardi, Mauro Bigonzetti, Sara Libori and Arianna De Angelis Marocco.

Saverio Peschechera (he/him), manager and director of theatrical and cinematographic production, has partecipated as an actor in many performances (Homosexual or the difficulty of expressing oneself, Delirium of a populist trans, One piece for sport) and film (The Bitter Years) directed by Adriatico.